Today I present to you something that isn’t sabermetrics. It isn’t even really anything. But I do have a great name for it: PSEUDOMETRICS. Pseudometrics* is the red-headed stepchild of sabermetrics, if said stepchild were a pile of moldy socks woven from backhair.  Pseudometrics, like sabermetrics, answers questions about baseball. Where it differs is in the kinds of questions it asks. Whereas [real statistic] might try to answer [real question], pseudometrics attempts to answer questions like, “Which baseball player is most like a grape?” and “What would happen if we made Kyle Farnsworth the next Dalai Lama?” In other words, pseudometrics asks the unanswerable and then answers it, gauchely. In doing so, it employs methods that are less than precise. It’s like bombing a field of rocks in Utah and then looking for fossils in the crater. You might find a dinosaur, but probably you’ll also be at the bottom of a crater with no way up and no friends and no hope and planes flying overhead dropping bombs.

One might say pseudometrics is “useless,” but I’ve already thoroughly abused this website with a truly useless statistic. Instead I prefer to think of it as “ineffable,” in the same way the word propels the plotline of Good Omens by Neil Gaiman and Terry Pratchett. That is, in a possibly meaningful, possibly irrelevant way. It’s an umbrella under which unquantifiable inquiries are crudely quantified and dispensed to readers (you) who starve for numbers that tell you what’s really going on. Except these numbers don’t. But they feel like they do, and that’s what counts. Even us stolid empiricists require a little good feelin’ every now and then.

To celebrate the introduction of Pseudometrics and its overflowing banks of ineffability, I want to begin by considering who the most and least ineffable ballplayers are. Sound dumb? Grape!

Methods: How to Determine Ineffability?

Firstly, what does ineffable mean? VOI-diddly-LA: 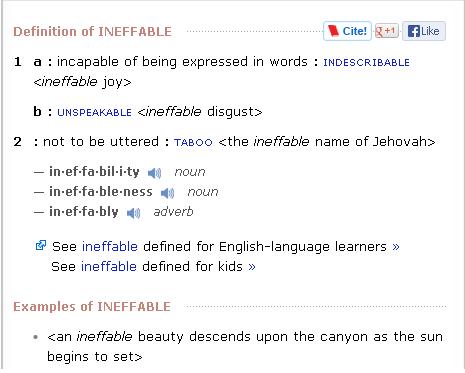 And so on. We’re looking for players that have qualities akin to life’s greatest mysteries and poignant moments. Rather than me rattling on like ‘3PO, let’s discuss numbers:

Note: I’m looking at data from 2011 through the present.  I needed larger samples for the knuckleball stat.

Clutch is by far the most obvious indicator of ineffability. It’s a statistic that is itself ineffable, unless discussed by Jeff Sullivan, perhaps, who is himself ineffable, perhaps. Clutch measures win expectancy; it also measures expectancy itself [note: it does not], i.e., the very bated breath of the universe surveying Life and Death at polar ends of the mortal seesaw. As such, I deem both highly positive and highly negative Clutch scores to be indicators of ineffability, as both extremes indicate a closeness with the inarticulable.
Clutch Leader: Howie Kendrick
Clutch Laggard: Alex Rios

Try explaining BABIP to someone. Literally find someone actual and real and human and explain BABIP to them now at this moment. Do it. Obey. OK. How did it go? Poorly? It went poorly, didn’t it? Oh. It went well, for real? Don’t tell me that. God. I want to pretend I’m the only one who has a hard time explaining BABIP. Wait, I am seriously the only one? The only one on Fangraphs that can’t explain BABIP properly without futilely pulling up MLB.com on my cracked iPhone to search for Vernon Wells weakly popping up a shallow fly while muttering that Joey Votto does the opposite thing where he hits it hard a lot so it goes better and fast guys are fast guys sometimes too so they also do the thing I’m saying things about good, too, then?
Leader: Joey Votto
Laggard: Vernon Wells

This one’s a lot related to the previous one, except I can explain it, I guess. The reason it gets consideration for hitter ineffability is that it is entirely beyond me how a mortal man can not weakly ploop up a baseball hurled at the Speed of Salazar. Or simply strikeout. Or, after seeing one pitch, cowering to his childhood bedroom, rocking back and forth holding Murphy the Wabbit, the only true friend mortal man has ever really had. Lower IFFB% is more ineffable.
Leader: Joey Votto (followed very closely by Howie Kendrick and Joe Mauer)
Laggard: Brendan Ryan

What is it, really, that protects someone from being beaned? Is it that they stand further from the plate than other players? Is it that they’re intimidating, and opposing pitchers are afraid? Are they nimbler and able to move away from inside pitches? Or are they more afraid of the inside pitch and shrink rather than take the blow? Maybe their weakness is outside pitches or their overwhelming strength is the inside pitch and pitchers avoid placing it in close? These are all good questions. They are questions too good for pseudometrics. Instead, I blindly believe players who are hit less by pitches are protected by something ineffable, an invisible ward providing protection from all hurled implements.
Leaders: 9 righteous dudes. None of them are Greg Dobbs, since I’m sure that was your next question. He’s a righteous dude I bet, though.
Laggard: Carlos Quentin

The knuckleball is the most ineffable pitch. It’s movement cannot be described. It can scarcely be measured. But, I mean, it still can be measured. And also described. So that’s good. It means we can look at which batters see, on average, the most movement from a knuckleball. The thinking/feeling goes that some batters, by merely being in the box, inspire the flight of a knuckleball to move with greater vigor and accentuated bump. By looking at pitch f/x data for horizontal and vertical movement I determined, possibly/probably erroneously, which batters saw the most movement from the knuckleballs they faced.
Leader: Ryan Doumit by an impossibly large, probably false margin. Followed by Michael Young and Delmon Young, who are not related.
Laggard: Disgraced Person and Former Boyfriend Ryan Braun

The formula is: Don’t worry about it.

Results: The Most Ineffable and the Least Ineffable Qualified Position Players in Baseball Since 2011

I’ve eschewed making a table. In fact, I’ve eschewed providing numbers at all. Possibly this means I tricked you, because earlier I said that only numbers could describe the ineffable. They do, but I just don’t have them here for you to see. The ordinal ranking is more interesting than the actual value of their “ineffability score” in my opinion. OK!?

INEFFABLEST:
5. Angel Pagan! Who I really wish was number one, because: his name.
4. Ryan Doumit! Largely because of his probably erroneous Knuckleball score.
3. Michael Young! Also largely because of his probably erroneous Knuckleball score and also scoring well on almost everything else, so, probably this sentence is dumb.
2. Melky Cabrera! We all know what’s “ineffable” about him, don’t we 😉 *the steroids JOKE-O-METER lights up and dings repeatedly*
1. Chris Johnson! How is he good!? OMG WTF? What could he be doing to possibly be a decent hitting third baseman? We can’t possibly know or describe it because Chris Johnson is THE MOST INEFFABLE PLAYER IN BASEBALL. /Jeff Sullivan can describe it, again.

WORST:
204. Dan Uggla! A fully effable, injured human being.
205. Yuniesky Betancourt! A mess of a ballplayer whose faults have been thoroughly described and ignored.
206. Gordon Beckham! His first name is also the name of the angry train in Thomas the Tank Engine!
207. Carlos Quentin! Please, keep beaning Carlos Quentin! Or don’t. I don’t know. Just play baseball.
208. Brendan Ryan! One antonym of ineffable is “communicable.” You could say Brendan Ryan is the most communicable player in the major leagues. You could then pretend that Brendan Ryan has the disease from the 1995 film Outbreak–a highly communicable disease. You could pretend to follow microscopic mucous particles floating through Safeco field after Brendan Ryan sneezes. You could follow these particles into the lungs of a wildly cheering fan named Barry Caniglio, and follow Barry home on the train where he coughs on his hand and then places it on a banister that thousands of people subsequently touch. You could picture all of Seattle having the disease from Outbreak, and the U.S. government deciding to firebomb all of Washington for the good of mankind. But then you’d be pretending something pretty disturbing. You’d be pretending something only a twisted adult would pretend, and you’d also be doing something mostly meant for kids; that is, pretending. You’d deserve to be looked at by a crowd of judging mothers til you broke down and wept. So. Yeah. Brendan Ryan. Communicable.

Pitchers
The most ineffable pitcher in baseball is R.A. Dickey.

Great! That was a lot of words to say nothing, basically.

See you at the Boston Fangraphs meetup, perhaps!

*Not this. But more like this, a website I found today while frantically googling to see if someone had already used the term “pseudometrics.” A guy named Pete Doane had. Nothing is new. All ideas have already been conceived and executed. Probably by tons of people. Full credit to Pete. Give his defunct blog some pageviews. Also, just now, at 10:05 AM on Thursday, August 15th, I found this transcript from a Keith Law chat. Now, at 3:11pm, I’m about to go get some tea. This is turning into a journal. Dear notgraphs, today I pretended Brendan Ryan was a disease.

The sensation of bursting a gusher in someone else’s mouth is also ineffable.

Guest
sorhtelo
You can flag a comment by clicking its flag icon. Website admin will know that you reported it. Admins may or may not choose to remove the comment or block the author. And please don't worry, your report will be anonymous.

Well, this was a weird glitch in my phone…